The religious faith of Edenboroughs in the United Kingdom were, in the main, of the Established Church (Church of England) so it was of great interest to find a record of one Edenborough appearing to be of the Quaker faith.


Among the large number of religious denominations that emerged during the early-to-mid-17th century in England was the Seekers. And while Leicestershire-born George Fox has been considered the founder and leader of the Religious Society of Friends (Quakers), the Seekers are best thought of as the forerunner of the Quakers, with whom many of them subsequently merged.


George Fox’s journal attributes the name “Quaker” to a judge in 1650 calling them Quakers “because I bid them tremble before the Lord”. Quakerism gained a considerable following in England and Wales during and after the English Civil War (1642-1651) increasing to a peak of 60,000 by 1680.


By 1657, a Friends’ meeting had been settled at Long Clawson and in 1673 a cottage and close for a meeting house and burial ground had been secured.


Fox’s movement ran afoul of Oliver Cromwell's Puritan government, as well as that of Charles II, when the monarchy was restored because Fox’s followers refused to pay tithes to the state church, would not take oaths in court, declined to doff their hats to those in power, and refused to serve in combat during war.
The 1753 published book, A Collection of the Sufferings of the people called Quakers, by Joseph Besse, reports on the hundreds of atrocious accounts forced upon the non-conformist society. Just one such example at Long Clawson being: 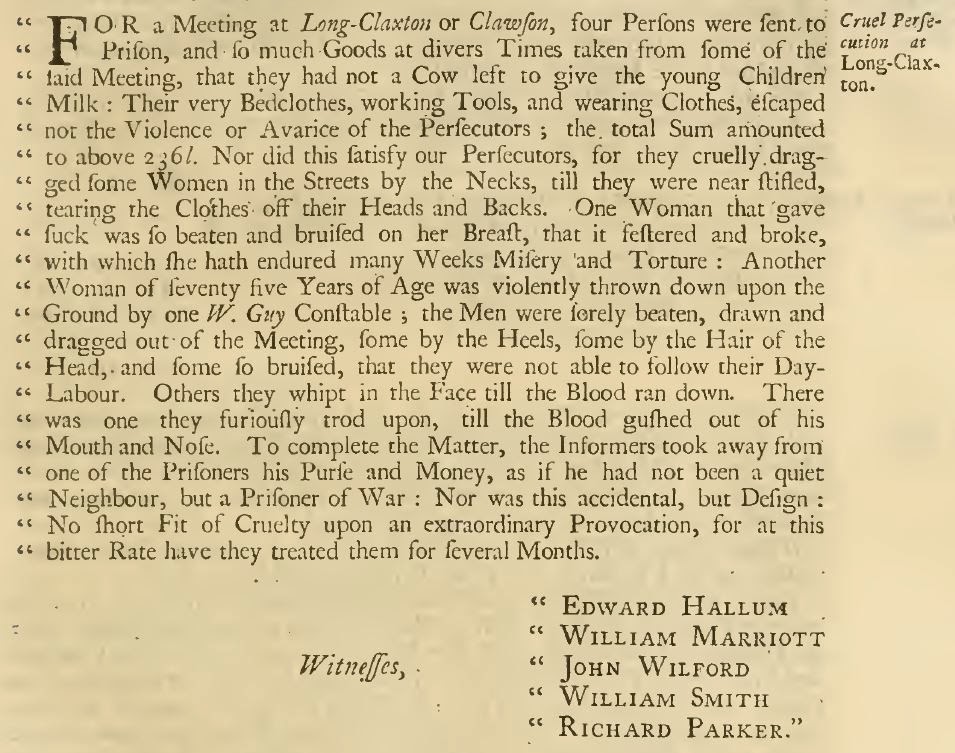 So just who was this John Edenborah buried at Long Clawson?
Quakers used plain language and dating practices to avoid using the names of months derived from heathen gods and goddesses so that “ye 11th: 10th mo: 1716”, translates to the 11th of December 1716.
I’m pretty sure that this John Edenborah is the same person as John Edenburrow of Hose, Leicestershire, who left a will dated 15 December 1716.
Although I have no proof at present, he may also be the Jno Edinborow of Hose who in 1683 gave a Quaker Intent of Marriage to Mary Blake of Harby. This would also tie in with the son Charles mentioned in the above will and I have a record of a Charles Edenborough born approximately 1686 in Hose, Leicestershire. My records show, though, that Charles practised the faith of the Established Church. So was John a one-off? Perhaps acquiescing to a Quaker wife?
Posted by Jennie Fairs at 20:34 No comments:


Annie’s paternal grandfather was Arthur Edenborough (Ancestor #1) who worked for many years as a tidewaiter for the New South Wales Customs Department, an occupation that was to see him forcibly carried away aboard an American vessel, the Emerald Isle, in January 1851. He was finally released in , and with the help of the British Consul there, was returned back to via in June 1851.


Annie’s maternal grandfather, Peter Persiani, was also involved with seafaring: family lore being that he was a sea captain who went down with his ship! He certainly disappeared after his daughter Teresa (Annie’s mother) was born in Sydney in 1862 but whether he perished at sea or deserted his family remains a mystery.


Prior to marriage, Annie Edenborough remained at home assisting her mother with younger children and other domestic duties required in a large household instead of obtaining a profession for herself. She eventually met and married James Dempsey at Paddington, New South Wales, in 1910.
Throughout their courtship, James sent many beautiful greeting cards to Annie and, as was the common practice of the day, Annie faithfully stored them in a postcard album that had been an eighteenth  birthday present to her from her older sister Jessie and Jessie’s husband, Frank Booth.


While both Dulcie and James were born at Balmain, Nancy was the first child to be born at Gladesville in Annie’s newly finished home built by her husband. In 2014 that home celebrated its 100th anniversary.
Posted by Jennie Fairs at 16:39 No comments: